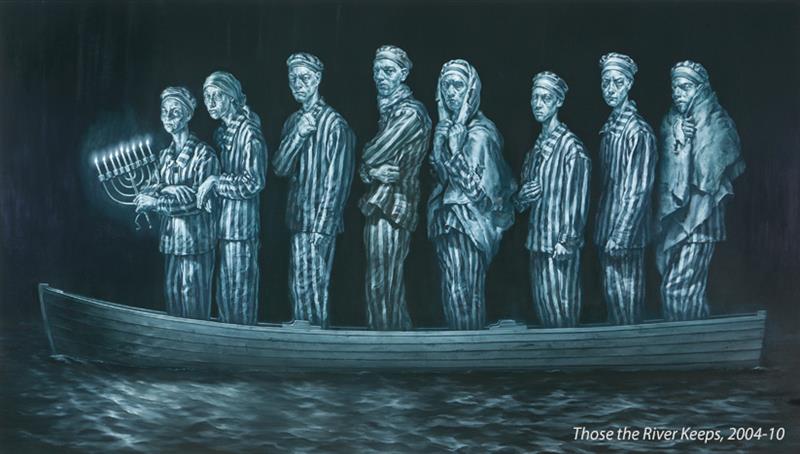 Art can illuminate traumatic experience in ways that are non-narrative and not necessarily bound to historical veracity as well as in ways that are polyvalent, metaphorical, ambiguous and elusive. With regard to the inconceivable enormity of the Holocaust and its effects on the children of survivors – the generation of “post-memory” –  what role can art play in both the preservation of memory and the mediation of the trauma which they have inherited? ​

To see the paintings in Geoffrey Laurence’s Holocaust Series, is to respond with a gut-wrenching recognition of their “genuineness” – their capacity as art to tell the truth with consummate aesthetic and emotional restraint. Laurence's astonishing technical bravura does not overwhelm or “aestheticize” the profound impact of the work. They are in equal measure both dazzling and devastating.

During the 1960's, the slogan, “Never Again!” emerged in the Jewish community as a rallying cry of defiance and grief. Unfortunately, there have been too many “Agains” in the 20th and 21st centuries – Stalin’s forced starvation of over 10,000,000 Ukrainians, the 50,000,000 – 70,000,000 Chinese murdered by Mao Zedong, the Cambodian genocide, the Rwandan genocide, and the Sudanese genocide and the current catastrophe unfolding in Syria. Where are the artists and other culture workers who will bear witness to those ruptures in history? Who will be their Geoffrey Laurence?

This exhibit was co-sponsored by the Mizel Museum in Denver.  The exhibit featured select artwork courtesy of the Tia Collection and the Museum of Biblical Art, Dallas, Texas​.

The Holocaust Series book is available on the artist's website.

Read the CU Medicine Today article, "Teaching Medical Ethics and the Holocaust,"​ in the May, 2016 edition.​

GALLERY HOURS:  Monday-Friday from 9:00am-5:00pm.
ISWASWILLBE is free and open to the public, on extended display through August 12th.
The Holocaust Genocide and Contemporary Bioethics Program, promotes education, scholarship and community engagement on the lessons of the Holocaust for health care and society.

Photos from Opening Reception on April 3, 2016