A Thorn in My Side, Paintings by Sandra Kaplan

When I moved to Denver from New York in 1980 its art-world at the time was modest and insular, and contemporary art didn’t have a very substantial or vigorous presence. There were many galleries that exhibited and promoted “western” or “regional” art – much of it romanticized or idealized images of a place and time that may or may not have ever existed. Predictably, mountains, cowboys, cattle and cactuses were prominently featured. There were only two or three “serious” contemporary galleries and a small group of artists who were in dialogue with each other and with the larger world of contemporary art beyond the region. It didn’t take long for me to meet them and familiarize myself with the themes and strategies of their work. Sandra Kaplan’s name was often mentioned as someone whose work I should take a look at, but she was almost invariably described as an artist who “paints cactuses.” Having seen enough cactuses in the art of the American west, I probably didn’t eagerly pursue her.

I can’t recall the circumstances that led to the opportunity for me to take a closer look at Kaplan’s work, but I do remember that the experience was revelatory. Her cactuses are located in the cosmos as much as they are tethered to the arid deserts of the American west. She is an artist whose capacities clearly encompass the precise and painstakingly realistic depictions with which I was growing familiar. However, her cactuses were different – often surreal ruptures in otherwise naturalistic scenes. Their eccentricities and peculiarities are, I believe, in the forefront of Kaplan’s ongoing fascination with them and inform, to a large degree our response to her work. Sandra is obviously aware of the kinds of ambivalences that are inherent in encountering a cactus. They can be oddly seductive, but their spines and spikes often inhibit a closely intimate encounter. They thrive in waterless environments but their flesh is a juicy, aqueous, “succulent” pulp. They have developed a strikingly varied vocabulary of forms – elegant, cute, beautiful and grotesque. Some species – Saguaros in particular – are easily anthropomorphized and their humanoid forms are often be found in a genre of domestic tsotchkes – salt and pepper shakers - “cactus kitsch.” (Not unsurprisingly, Kaplan has amassed a terrific collection of these quotidian, humorously quirky objects.)

Although the group of works assembled for this exhibition are focused on her cactuses and other botanical subjects Kaplan is a painter of an almost inexhaustible range – she’s an accomplished shape-shifter. A few years ago, she produced a series of large, hauntingly penumbral abstract paintings that are entirely unrelated to any nature-based sources. Her first exhibition at the Fulginiti Gallery – “Galactic Stories” - in 2014 - was inspired by photographs taken by the Hubble telescope along with related astronomical images, charts and maps. Although the cactus may be her north star she is equally at home in the desert and the galaxy. She possesses what might be described as an almost occult awareness of how shapes, colors and their combinations resonate in the viewer on a varying scale of vibrational frequencies, returning over and over to art’s relationship to the immediacy of lived experience.

One day soon Sandra Kaplan will get the full retrospective that she deserves. Until then this exhibition serves as a sumptuous introduction to Kaplan’s concerns, themes and accomplishments. My hope is also that Kaplan’s art offers something that has been in dangerously short supply lately – the kind of beauty that is both respite from and balm for the anxiety and isolation that currently suffuse our daily experience of being in the world. 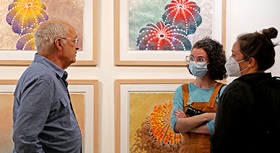