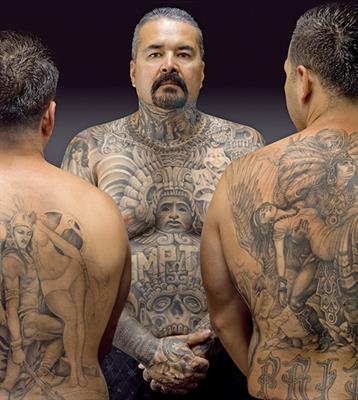 Embellishing the body with elaborate and complex tattooed designs was a highly developed  form of religious and mythic practice in many civilizations throughout the world for millennia, and the  practice is enjoying a revival among a number of indigenous and tribal cultures, as well as the youth of today.

Tattooing has multiple levels of meaning – physical, social, religious and personal. Becoming tattooed can be seen as a reclamation and re-appropriation of the body, an affirmation of group identity and solidarity, a spiritual “manifesto” proclaiming the bearers deepest beliefs and aspirations, and an iconographically essentialized form of autobiography – a pictorial narrative inscribed on the geography of the skin.

Eric Schwartz’s larger-than-life photographs focus on a style of tattoo artistry – “black and grey” -  which initially flourished amidst the Chicano pachuco gang culture of Texas and Arizona.  The film Tattoo Nation, conceived and directed by Schwartz, is an extension of the photographs in this exhibition and provides social, historical and cultural context in which the Black and Grey tattoo emerges and evolves.

Eric Schwartz is featured in "Tattoos: Fine Art for the Masses," on CBS Sunday Morning