Works from the Collection of Tobia and Morton Mower 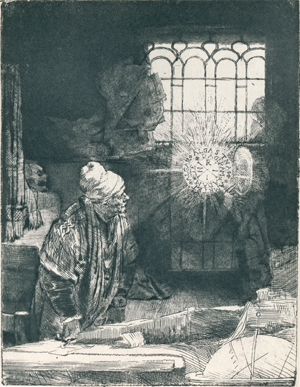 Rembrandt Harmenszoom van Rijn (1606-1669) is generally considered to be one of the greatest artists in Europe during what is called the Dutch Golden Age.  Even for those familiar with his extraordinary achievements, it comes as a surprise that it was Rembrandt’s etchings – not his paintings – that were primarily responsible for the international reputation he enjoyed during his lifetime.

Rembrandt was a great experimenter, and his unsurpassed mastery of the relatively new medium pushed it to the expressive limits that continue to be reflected in the etchings of modern and contemporary artists.   He was so superb an etcher that not a few critics and contemporaries were persuaded that he had discovered a “secret” process.  Rembrandt continued to evolve as an etcher throughout his life, and this exhibit includes superlative examples from each period of his development as an artist and printmaker.
Rembrandt: The Etchings is the second exhibition to come to The Art Gallery at the Fulginiti Pavilion for Bioethics and Humanities through the unstinting generosity of Tobia and Morton Mower.  Their collection encompasses the artist’s entire life’s work in a medium that is central to his achievement.  Unlike his best known paintings, the etchings are relatively small, and the intimate space of the Art Gallery makes them accessible for a closer look and for a renewed appreciation for his genius.

The exhibit runs through December 1st, 2017.

Read Strokes of Genius​ in the Aurora Sentinel.

Dr. Timothy J. Standring, Gates Family Foundation Curator of Painting & Sculpture ​
at the Denver Art Museum presented, "Rembrandt as Printmaker,"​ on November
27th, 2017.  With wit and whimsy, Dr. Standring shared how the Dutch master etched
his way into fame throughout his life.

Gifts to support this and future art exhibits at the Center for Bioethics and Humanities make a difference.  Any contribution great or small is appreciated!  Click here to make a gift.