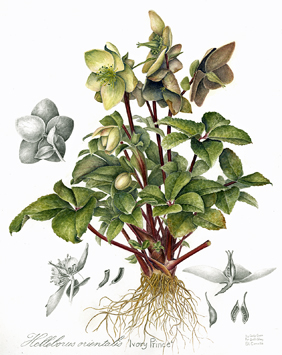 Potions, Poisons, and Panaceas was organized in partnership with the Arts and Humanities in Healthcare Program and the Denver Botanic Gardens School of Botanical Art and Illustration.
The complex relationship of people and plants is probably nowhere more clear than in the fields of medicine, pharmacology and the emerging areas of study which seek to investigate and clarify the ethnomedical traditions of immigrant communities and indigenous peoples. Further, plant-based substances previously referred to as “psychedelics” but now more popularly known as “entheogens”  which were undergoing clinical trials and engaging a number of serious medical researchers during the 1960’s and were banned during the government’s “drug hysteria” of that era have been restored to legitimate clinical research and exploratory trials and demonstrate particular efficacy in treating PTSD, addiction and treatment-resistant depressive orders The discovery of certain plants as “medicine” has engaged healers, doctors, researchers, mental-health professionals and indigenous shamans
for millennia and has more recently spawned entire industries that produce and market plant-based medicines.

This exhibit highlights both the medical and pharmaceutical properties of certain plants, revives our sense of awe when confronted by the beauty and mystery of nature, as well as it introduces us to an art-form that – though it retains many of its characteristic historical qualities - has evolved and incorporated many aspects and assumptions of modernity.

The origins of botanical illustration and the science of botany progressed alongside the history of medicine, especially pharmacology, in ancient Greece.  In the 4th century BCE, philosopher and physician Diokles of Carystus, compiled the earliest known medicinal reference manual for botanical study and plant identification.  This work, and so many of its successors, have not survived.  Although we do not know about the quality and accuracy of these illustrations, we do know that very early on, the Greek herbalists realized the power of the image.
The period of exploration and discovery in the 18th and 19th centuries is said to be the golden age of botanical and nature illustration.  Thousands of plates and sketches were produced by skilled naturalists while exploring unknown parts of the world.  Today an estimated 391,000 plant species are known to science, of which nearly 21,000 have a documented medicinal use.  The search for new species is on-going, and illustrators continue to document.

The botanical illustrations that accompany scholarly works have a clear purpose of species identification with the artist acting as the hand and eye of the researcher.  Botanical illustration, like any scientific illustration, requires accuracy, realism and objectivity, as opposed to emotion and sensitivity that is often found in other art fields.  The illustrator’s ability to observe and accurately record details has proven to be superior to the detail found in a photograph.

Photos From Opening Reception and Gallery Talk on September 8th