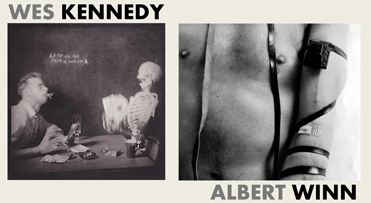 The AIDS epidemic sometimes seems like a disease of the past, but it is still very much with us.   In the 80s and 90s, photography played a large role in shaping public perception of the disease, and the images we encountered were of mostly white gay men with hollowed eyes and emaciated bodies, hopelessly resigned to death.
This exhibition features two artists from that time, one is Wes Kennedy and the other is Albert Winn.  Kennedy died in 1993 of the disease.  His work is rooted in fantasies with manipulations of dream-like images that are alternately erotic, grotesque and surreal.  Winn survived those years as one of the first generation of AIDS sufferers to be treated by the “cocktail,” a combination of anti- retroviral drugs.  His photographs are confrontational and domestically tender.
Albert Winn & curator Simon Zalkind discuss the exhibition, on January 31 at 4pm at the Fulginiti.
Read about the exhibition in Westword.