A legacy is often defined by the past, but lived with an eye to the future – it encompasses the opportunities created and those yet to be inspired. Upon Sheldon Steinhauser’s retirement in 2015, we looked back at his proud legacy of fostering diversity and fighting for causes to help others. But we also looked forward to the achievements made possible by such a leader, and the great potential of the generations of people inspired by Shelly. It is in this spirit that the CU Skaggs School of Pharmacy and Pharmaceutical Sciences at the University of Colorado Anschutz Medical Campus created the Sheldon Steinhauser Diversity Scholarship.

Sheldon “Shelly” Steinhauser dedicated his career to underrepresented populations and human rights, and to making higher education accessible to countless future leaders. Fresh out of college, Shelly accepted a job at the Anti-Defamation League, and spent the next 35 years of his career advancing Jewish rights and dedicating himself to community service. For the next six years Shelly was the director of the Allied Jewish Federation. He later served as president of Sheldon Steinhauser & Associates, a consulting firm focusing on workplace diversity and inclusion. He was also a founding board member of the Latin American Research and Service Agency. Shelly has received numerous awards including the Distinguished Pioneer in Aging Award from the Colorado Gerontological Society and the Martin Luther King, Jr. Humanitarian Award.  Shelly took his passion for helping others to Metro State University where he taught courses on aging and social issues and inspired the next generation of humanitarians. He went on to serve the CU Skaggs School of Pharmacy and Pharmaceutical Sciences as senior director of development. Shelly was an integral part of the CU team diligently working to bolster the school’s clinical, education and research programs.

Your contribution to this fund will:

2. Foster a diverse student population from Colorado and around the country 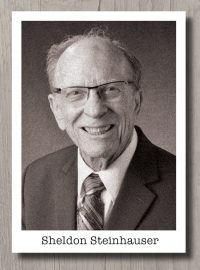