Yoga and Buddhism: Aren’t They Kind of the Same? 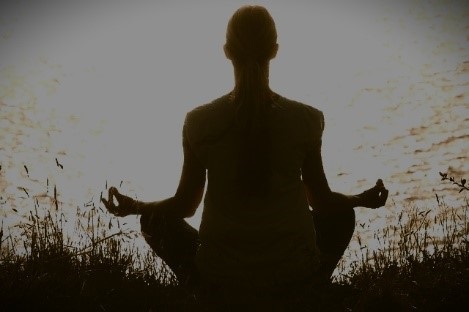 It was a strange request.  “Could you meditate with this patient in the ICU?”

When Kevin was admitted, he listed his religious affiliation as Buddhist.  Now seriously ill in the ICU, the  primary team suspects he has advanced cancer.  When I came to visit, he looked surprisingly well.  Kevin identified as a middle-aged Black man with smooth skin and normal weight; it was hard to believe he was so ill. There was a time bomb inside him, including a large mass in his mediastinum and a large collection of fluid around his heart that had already been drained once.  They were keeping him in the ICU for close observation.

Kevin was alone.  He had been born and grew up in California, traveled more widely after joining the Army, and due to his nomadic life, he had developed few personal attachments. He was here in Alabama to be closer to his family, as his parents had moved from Alabama to California.  Selma, in the Black Belt, was their ancestral home, and he had visited often in the summer as a child. During his visit, he was taken to the hospital and then transferred 100 miles away to the Birmingham VAMC because he was a Veteran, had no other insurance and his illness was so serious.

I hadn’t met many Buddhists at this point, but why did Kevin and I cross paths?  A few years earlier our VA hospital had offered a reduced cost Yoga course as part of their Wellness initiative and I was the only one I knew who had tried it out. For the two years prior to meeting Kevin, I had met with a group of 10 others for Yoga with an experienced yogi named Jane.  Jane introduced the practice to a somewhat dubious population.  I wasn’t at all sure about yoga at first, but soon I was hooked. I looked forward to the Tuesday evening class on the way home. Prone to oversharing, yoga was incorporated into the eclectic interest of Amos the Palliative Care doctor.

If Kevin was dubious of my bona fides, he kept it to himself. I think he just thankful for someone else to talk to. I would learn that his introduction to Buddhism was by way of the Army. Stationed in Korea he had visited many Buddhist temples. At first out of curiosity and later in search of nature, peace, quiet and tranquility.  He had been raised Christian, but this religion had never clicked for him. Buddhism seemed to accept him for who he was and although there was not always a Buddhist temple nearby, there were many places in nature that captured much of the experience.

Thinking that I would need to do something, I suggested a progressive relaxation exercise and Kevin agreed. At subsequent daily meetings we would just sit quietly or chat, whatever seemed best. He grew calmer and more “centered” every day. Even on the day that he died as the now diagnosed cancer choked off his heart.

In the last few years, we have had several chaplain students at our hospital who have a Buddhist background. Some chaplains identify as Buddhist as a result of family and cultural heritage and some are Buddhist by choice.  A choice that has only grown more common during the last few years of the pandemic.