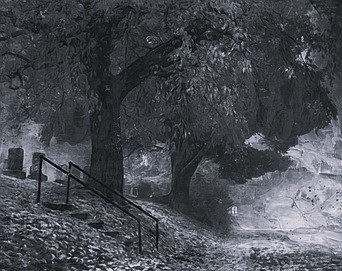 Mr. K had been sick for a long time. Although he had dementia and thought Nixon was president, he did remember that he had Multiple Myeloma for 14 years. That is a long time for a disease that's average life expectancy is 3-4 years. Few people live more than 5 years.

We had tried to call his surrogate decision maker, his sister, but there was no answer at her home. Over the next few days, we reached Mr. K’s nephew who told us that his mother, Mr. K’s sister, had died just that week. He knew that Mr. K was sick and agreed to a DNAR order but asked us to try to turn things around since there had been too much death in the family in just these last few days.

Today I called to let the nephew know that this uncle was much worse, and we needed to transfer him to the palliative care unit. We could get no answer on the phone. Later that morning we got word that he had had a flat tire on the way and had to turn back but he would be on his way soon. Mr. K did not wait but died in the early afternoon.  When the nephew finally arrived the nurses stopped him at the station and brought him to my office. I broke the news that his uncle had died about an hour earlier. He seems stunned with too much death but said he knew that his uncle had been sick a long time, 14 years. I asked him he wanted to come into the room to see his uncle’s body but he seemed unsure as I walked him to the door.

Usually it is the women folk that come to the bedside. They shed tears, kiss the forehead, and stroke the hands gently. The nephew spoke warmly to his uncle and firmly, in a friendly way punched his upper arm while vigorously rubbing his forearm. He kept his own arm between him and his uncle as he reached over in a clumsy embrace. This seemed to be the way men often greet each other. He told him that he was now in heaven with his sister, parents and other family members.  Quickly now he was ready to leave. It was time to go and talk with family services and make “the arrangements” for the body. I wondered briefly what he would choose.

Lately I had been reading Wendell Berry, who been writing about rural Kentucky for more than 70 years. In the past he has been called a Luddite but now seems prescient if not prophetic in his skepticism of the superiority of the new ways.

So treat me, even dead,
As a man who has a place
To go, something to do,
Don't muck my face

With wax and powder and rouge
As one would prettify
An unalterable fact
To give bitterness the lie.

Admit the native earth
My body is and will be,
Admit the freedom and
Its changeability.

Dress me in clothes
I wore in the day's round.
Lay me in a wooden box.
Put the box in the ground.

Beneath this stone a Berry is planted
In his home land, as he wanted.
...

I have long said that I did not want to be embalmed or put on display, cremation seemed a better way.

Cremation though is not the way of my people. It would be more consistent with my heritage to be buried without toxic chemicals, wrapped in a cloth or simple box deep in the ground where I would join the generations that came before. I wonder if they even allow this now; to be buried simply in the ground?  I haven’t told my family of these thoughts.  I suppose I should, but I would not want to make things hard, to ask for special care of the dead body when I have struggled so long to change the way we care for the living body.