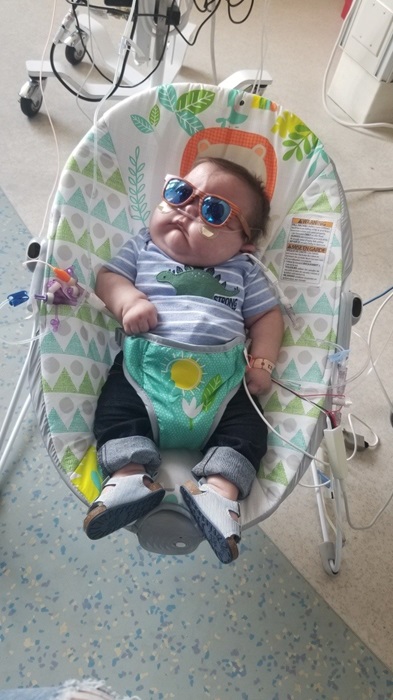 A Latina mother sits holding her 6-month-old son in the pediatric intensive care unit (PICU), visibly upset, tears rolling down her face as she kisses his forehead and states in a strong firm voice “All I ask of you is to respect my decision. I will never decide to remove life for my son, I couldn’t live with myself! Please do NOT ask me again what I wish to choose.”

“K” has been hospitalized his entire life, except for being home all of ten days, a time that was enjoyed by all of his loved ones. He was able to meet and visit family members, accompanied his mother shopping, went out to eat and ‘hung’ out at a wedding in his tux. “K” was diagnosed with a congenital disorder called glycosylation type 1C which is associated with brain malformation, refractory epilepsy, enteropathy, nephrotic syndrome and ultimately the cause of his current critical state of illness for the last three months. He lived in the neonatal intensive care unit before going home but his little body suffered a septic shock. This was further complicated by cardiac arrest, seizures, and aspiration events that led to intubation for several weeks and subsequently extubated successfully. He still lives in the PICU dependent on TPN/lipids, medication management for his intractable seizures, is frequently bagged and masked for his desaturations (<30%) to keep him comfortable while he lives in this chronic state.

Our palliative care team checks in to visit with “K’s” mama on a weekly basis, most recently she’s been taking care of herself by going home, minding over her house chores, feeding teenage children, but most importantly trying to live a quality of life for herself as best she can while her infant son remains in the hospital. She’s been asked over and over by the medical team to consider taking “K” home. She had thought about it, he was ‘somewhat’ stable at the hospital, but the questions lingered in her mind and heart, could I watch him die without me trying to ‘do something’ other than just hold him?

She spoke to other moms on the unit, one mother shared with her how she was taking her 3-year-old son home. She needed to care for him on her own terms, she was ready to take her son home, “K’s” mom only wished for the strength to do the same.

After multiple conversations with medical attendings, her husband and family it was decided that “K” would remain in the hospital because it was there that he would have another day to live. It was in the PICU that his mama could visit and hold him for several hours enjoying the warmth of his skin against hers, singing to him and telling him stories.

Both parents were realistic about his life expectancy, it wouldn’t be long before God would call him home, their hope was that they would be able to hold him for another day. A week or a month. You see, “K” is not the first child to experience this type of life with his family. Many other parents are living out a journey filled with what they see as respecting the life that has been given to their child. In the Latin culture family is important, as much as life is respected no matter what that may look like. Death is respected but it’s kept at bay by not speaking “of what it is or how it may look”. Often our conversations in Spanish are such that we share the ‘small talk’ of everyday life, getting to know each other from different walks of life. Intertwined in these conversations we speak of the child’s life, what it looks like being away from him, grieving the loss that is coming when the days of holding him for hours at the hospital cease to exist. We speak of the values in our Latin culture and the ‘respeto’ for death and life itself.

“K”, like many other children in this hospital will not grow to be ‘normal’ but he’s comfortable, in spite of the seizures he experiences and the “air of life” that is breathed into him to live another day, that is what his mother sees and feels. Many mothers’ sit and watch their medical team ponder outside their “fishbowl rooms” watching their faces for another glimpse of hope, yet catch the distressed, tired look of having to come and care for “K” again. It’s noticeable when “they” walk in halfheartedly to care for him or talk to the mother about ‘what to do next’. Each family has their unique goals and values about what they wish for their child. Palliative care is there to improve the quality of life for their child and family as they witness the serious illness that has invaded the life of their son/daughter.

“K” wasn’t the first of this family’s children to have death face them after birth, the parents had miscarried two other children and buried a five-month-old. Death was no stranger to this family, ‘respeto a la muerte’ (respect towards death) was strong to this faith filled Catholic Latin family. Advanced medical technology had given them the extra time to enjoy those few precious moments as parents, palliative care provided them with the extra layer of support and reassurance of a listening ear. The ‘respeto’ continues to be given, by honoring their journey through their circumstances as best we can through our skills as palliative care providers. We will move on with our lives, they have to go home with the burden of not having their child.