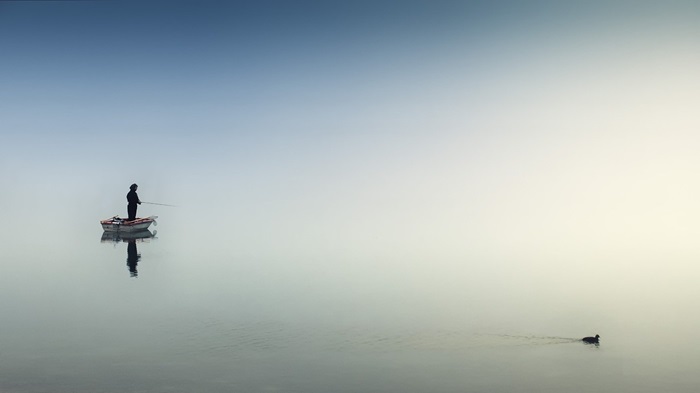 Depression is a common problem encountered among patients on the palliative care service. Also there is a lot of concern about dignity and preserving it. It has been suggested that when working with debilitated people and looking toward the end-of-life, that a screening question could be asked about what brings a person pleasure; a common part of dignity preserving therapy is life review.  It is surprising how often fishing comes up when you talk to older men. I have taken to asking people how long it has been since they have been fishing.

There are some avid fishermen who despite disability have been out on the water in the last few weeks/months; hunters who were in their deer stands during the last hunting season or at least back at the hunting camp drinking beer and doing the kind of cooking men do when on their own.  However, for what seems to be a larger majority the last time they have been fishing was years ago. And if they ever where an avid fisherman it was sometime in the past maybe as a youth, perhaps with a father or uncle. If they still had a rod, it is dusty, the line rotted and hooks rusty.

Strangely though fishing comes up again and again. I am not a fisherman now, but I have done my share as a son and then as an adult on rivers and lakes in West Virginia.  What I do remember about fishing is that it can be cold, wet, hot, burning sun, hard, disappointing, and impossibly boring when nothing happens for hours or even a day. Every fisherman has had days of coming back empty handed.  The last time I fished was now nearly 20 years ago. I had gone on a trip with some buddies before moving back to work at the university. That day I was standing in the river and spied a rock that seemed to be the perfect place for a trout. I knew that if I cast upstream from the rock, the current would carry my bait directly in front of his lair. It was a magic moment when I caught my last fish.

I think that is why I often hear fishing being offered up as something to yearn for as it is easy to idealized. Stuck in your hospital bed being cold, wet, hot and even bored leads to the memories of being out in a boat or standing in a stream which can seem like paradise; especially when you have some magical moments to remember.

Recently I was reading a poem by Billy Collins that helped me understand how fishing could have such an allure, even for someone that had never been.

Fishing on the Susquehanna in July

I have never been fishing on the Susquehanna
or on any river for that matter
to be perfectly honest.

Not in July or any month
have I had the pleasure--if it is a pleasure--
of fishing on the Susquehanna.

I am more likely to be found
in a quiet room like this one--
a painting of a woman on the wall,

a bowl of tangerines on the table--
trying to manufacture the sensation
of fishing on the Susquehanna.

There is little doubt
that others have been fishing
on the Susquehanna,

rowing upstream in a wooden boat,
sliding the oars under the water
then raising them to drip in the light.

under a blue cloud-ruffled sky,
dense trees along the banks,
and a fellow with a red bandanna

sitting in a small, green
flat-bottom boat
holding the thin whip of a pole.

That is something I am unlikely
ever to do, I remember
saying to myself and the person next to me.

Then I blinked and moved on
to other American scenes
of haystacks, water whitening over rocks,

even one of a brown hare
who seemed so wired with alertness
I imagined him springing right out of the frame.