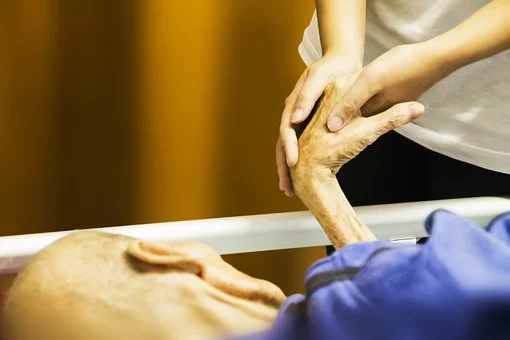 I slowly sipped my coffee as I sat down at the desk and logged in to the computer. It was a Sunday morning and I was on my last day in a long stretch of shifts. It was the middle of winter and the census was heavy, full of patients with respiratory infections, congestive heart failure, the usual. I’ll admit I was planning to round quickly and get home. My family was arriving in town later that day and I still needed to clean the house and buy groceries. I opened the chart of a 33-year-old man admitted overnight and was immediately struck by his diagnosis: acute respiratory failure, history of metastatic lung cancer. And only 33 years old. As I read on, I learned that he was diagnosed 2 months ago when he had a cough that just wouldn’t resolve. At the time of his diagnosis, it had already spread to innumerable additional sites. His prognosis was extremely grim, but he was still doing everything he could to “fight” it – chemotherapy, radiation, a feeding tube.

He had been admitted this time because of worsening shortness of breath and was being treated for post-obstructive pneumonia and bilateral pleural effusions. As I reviewed his chart, I put together a list of all the orders to put in – antibiotics, fluids, thoracentesis, bronchodilators, etc. It wasn’t until I reached the bedside that it occurred to me that none of those things were what he actually needed. He needed someone to recognize that he was  dying. He needed someone to give him medications for his symptoms – something to take away the severe pain

With his wife, son, and parents at the bedside, I entered the room and met their anxious pleas to fix this, to make him better. He was struggling, gasping for breath, wincing in pain, with sweat on his forehead. I sat at his bedside, held his hand, and told them all plainly what I was seeing. He was dying. I talked with them about their options ranging from intubation and ICU care to comfort measures, and hospice. Ultimately, they chose to prioritize his comfort, which was a big departure from their previous mantra of “we will fight this, we will beat this”. He was dying and we had the opportunity to provide him with peace, comfort, and dignity at the end of his life. Now, the only way for us to “beat this cancer” was to allow him dignity in his final moments. I spent nearly my entire day at his bedside assessing his symptoms, changing his medications, counseling his family, and providing support. He died that evening with his family at his bedside. I will never forget the sound of his mother sobbing after I pronounced him dead. It was one of the hardest moments of my career thus far, but also one of the most fulfilling. I helped this man die in peace and helped guide his family through incredibly difficult decisions. It is cases like this that have made me realize my desire to pursue a career in Hospice and Palliative Medicine.

Erin Vipler is a Denver native and has been an academic hospitalist since completing internal medicine residency in 2015. She is very excited to join the Fall 2021 cohort pursuing a Master of Science in Palliative Care, as this has been a long-term passion of hers.  Additionally, Erin will be joining the Division of Hospital Medicine at the University of Colorado Hospital this summer.