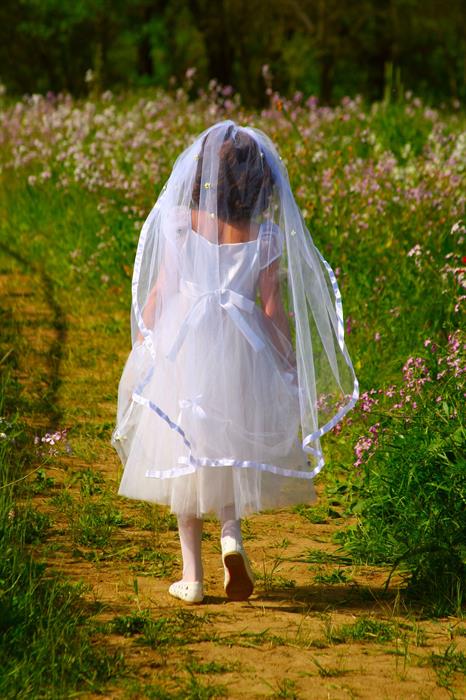 One of the most surprising moments in the preparation of a body was at the death of a 7-year female. As I was preparing and bathing the child’s body, the mother had made a decision not to be present as did her father, but the 5-year old sister insisted on helping me wash her sister’s face and comb her hair and place her first communion tiara and vail on her.  She did so with such enthusiasm, love and gentleness.  We openly talked about her dead sister and where her body would be buried as well as where her soul was going.  I most certainly wasn’t expecting this from a 5-year old, not especially from a family who had refused to discuss her death or progression of illness.  There was never any talk of ‘what was to come’, the family was so unprepared, or so I thought.  So, the child’s willingness to be a part of helping to dress her big sister for her final departure was a blessing of all sorts for me and her parents.

Now for the dying child’s rest of the story……

She was 6 years old when she was sent home on hospice care. Her family was of Hispanic descent, Spanish speaking only and filled with faith in their Catholic religion that their child would not die, if they believed!  The parents chose not to speak of her declining illness, rather focusing on making every day as normal as they possibly could in the face of a Rhabdomyosarcoma tumor to the left side of her jaw.  When I came in as a hospice nurse and presented to them what my purpose and job would entail, the parents listened, then politely informed me to never repeat the prognosis and probability of their 6-year old daughter dying.  If I was to be their daughter’s nurse I would come in, assess, determine physical needs and leave.  In their eyes their daughter would live on to see her 7th birthday in a few months, to enjoy her first holy communion and be proof of God’s miracles on this earth for all to see.  I of course, agreed to the parent’s requests I would meet them where they were on this painful journey.

Through the course of time I grew close to the family. It was impossible not to share in  their joys as they prepared for her birthday and first holy communion celebration.  Her five-year-old sister would greet me with a shy smile, gaining trust in my companionship and welcoming of my time spent with her.  We would sit and share in play as her mother completed cares for her older sister who remained in bed on 10L of oxygen. As we would wait for Mamá to finish with sister’s care, the five-year-old would speak intermittently of what her days had been like., , Papa was always working to bring money home to them and she took every opportunity to play with her sister in bed.  It was always a good day when her older sister could spend time outside of the bedroom.  She would talk of the preparations for her sisters’ birthday and first holy communion, sharing private conversations she had with her sister to not be afraid of what was happening. They often heard their parents speak in whispers of her sister’s illness prayerfully asking for her tumor to heal so she wouldn’t die.

I continued to respect the families wishes to not speak of their daughter’s grave illness and disease progression as I saw it evolve before my eyes.   I experienced moments of frustration when offering morphine as a choice for pain relief. The parents would refuse, stating Tylenol had just been administered and ibuprofen would be given in 2 hours, along with holistic therapies that would ease her discomfort.  While I had my nursing doubts of the ability of this pain plan working, I witnessed this little girl fall into a deep sleep, without pain or discomfort, peacefully slept. Was it love of family, or truly the herbs that were being administered which were relieving her discomfort?    Morphine was only used in the last two days of her life when the parents called me to assist in its administration.

Her 7th birthday and first holy communion were reported to be a  beautiful celebration of life filled with family and worship.  Through small talk, quiet time spent and getting to know the family, they learned I wasn’t interested in being the death person they were afraid I was at first. They came to know that I wanted only to focus on what was important to them, living each moment with joy and spirited love as best they could, fully understanding – without constant conversation, that death was in their midst.  In the family’s own way, they welcomed the reassurance of my presence after the first few visits of awkwardness

I was working that morning she died.  I arrived at their home thinking about everything I should have talked about, guided them through and prepared them for this place.  I didn’t know if they wanted her cremated or buried, nor if they had chosen a funeral home. This was going to be so chaotic.  I found the parents at her bedside, the five-year-old sister playing quietly on her bed.  Tears were quietly being shed and, unexpectedly, a great sense of peace filled the room. By living their quiet faith, they shared her death process with me.

The child had experienced pain, morphine had been given earlier that morning, the parents knew it would be soon.  The child requested permission from each of her parents to go with Jesus who was standing at the bedroom door holding His hand out for her.  Her mother held her daughter first asking her if He was telling her to go with Him. The child answered, “yes but only if you let me go”.  Her Mama held her daughter for what seemed an eternity but eventually agreed, verbally telling the young child to go with Him. The child then hugged her Papa, asking him the same question but not before hugging her little sister and saying goodbye.  As her Papa hugged her, he whispered, “I give you permission, go to Him amor”, the child took her last breath.

As I prepared the body with the little sister, the parents spoke with the hospice chaplain and their priest.  The little sister placed her sister’s first Holy Communion veil and tiara upon her head after we had washed her face and combed her hair.  She placed one kiss on her forehead and with a smile jumped off the bed as I completed dressing the deceased child in her communion dress.

It’s within us to allow families to guide us through death, in their time.