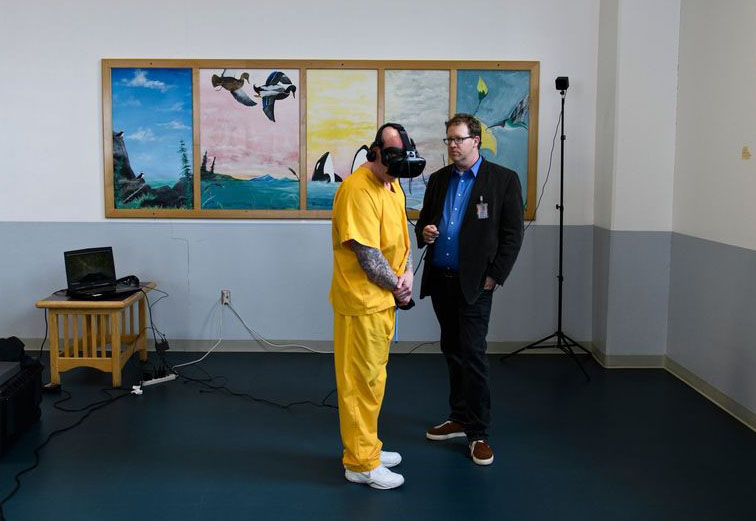 The teardrop tattoos on his face were clues that the inmate was imprisoned for a serious violent crime, probably murder. He and the other inmates we met were, clearly, not the usual people that we engage in our quest for innovations in mental healthcare.

As we prepared to take virtual reality tools to the maximum-security Spring Creek Correctional Center in Seward, Alaska, we had been somewhat unsure of what to expect and some on our team were a bit apprehensive. But, the Alaska Department of Corrections had invited us, asked us to bring therapeutic virtual reality for a test, to get feedback from inmates and officials, as a first step toward evaluating VR’s potential to enhance prison safety and reduce recidivism after convicts had served their time.

Why prisons? Why convicted criminals? Why take a cutting-edge tool – best known for gaming applications — to these people?

Correctional facilities in the United States are often considered the largest providers of mental health services. According to the Bureau of Justice Statistics, more than half of all prison and jail inmates live with one or more mental health conditions, including substance abuse or addiction. But treatment options in correctional settings can be severely limited due to staffing, constrained health care budgets, location of facilities in remote areas and limited mandates for care provision. For too many mentally ill inmates, the institutional option for protecting them from harm is to keep them in solitary confinement, which makes their symptoms far worse.

The even larger cost is that individuals with untreated mental health and substance abuse conditions are at significantly higher risk for recidivism upon release from prison or jail. Nearly all current inmates in Alaska will be released at some time, and two-thirds of them will eventually return to prison. The cost to society of re-incarceration is substantial.

Addressing the mental health of incarcerated individuals and their successful reintegration to community life presents an opportunity for innovation that balances public safety concerns with a commitment to recovery.

When we received a call from Alaska Department of Corrections (DOC) Deputy Commissioner Karen Cann, we were intrigued. Cann indicated they had a real opportunity – the combination of progressive leadership interested in innovation that held the promise of better results than they’d been getting from previous initiatives, grant funding (the Second Chance Recidivism Reduction Grant) and a legislative initiative to revisit their strategy for diversion and community re-entry. The DOC wanted to make the most of this opportunity.

Alaska DOC deals with a huge geography with limited transportation and broadband infrastructure, over-representation of Alaskan Natives in their incarcerated population, problems with housing and employment particularly in the rural villages, severe shortages of behavioral health treatment providers, and the consequences of untreated or under-treated substance abuse. Any one of these would present a stiff challenge.

But we were excited by the DOC staff’s openness, their renewed efforts to reach out to and follow the guidance of Alaskan Native elders and other community stakeholders, and the dedication, experience and innovative spirit among DOC leaders.

Alaska’s context, needs and assets were fertile ground for technology-based innovation. This could include technologies that might:

Today, we are in touch with several technology firms who are very interested in sharing existing solutions for the corrections population. These firms working on future tech tool design iterations are eager for input directly from inmates and their family and friends, those recently released back into community life, and the corrections, probation and parole officers who interact with them regularly. Virtual reality tools, artificial intelligence-driven education or coaching tools, and emerging telecommunications products all may come into play.

As for the inmate with the tear drop tattoo? We don’t know what he was convicted of, nor did we ask. He, and all the inmates we encountered, had earned their chance to experience VR on that day through their good behavior records “inside the walls.” They were polite to us and interested in virtual reality, and most importantly, provided us with enough insight to continue to the next steps in developing technologies to improve safety inside prisons and in our communities to which convicts eventually return.

We learned a lot during this initial visit to the prison. Most importantly, we learned that using technology in incarceration isn’t being soft on crime. It’s smart justice.