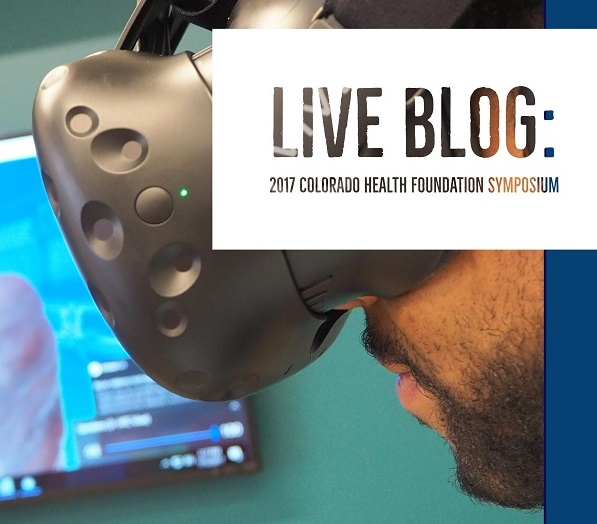 And it’s a wrap!  After one final virtual reality demo lab, we are packing up and heading home to the National Behavioral Health Innovation office on the CU Anschutz Medical Campus.

We were delighted by the many people who stopped by to learn and engage.  Our thanks to the CHS17 host, The Colorado Health Foundation. What a great gathering!

AUGUST 3, 2017  2:30 p.m.
Because of interest in our Center’s work in virtual reality, NBHIC Director of Technology Strategy Dr. Walter Greenleaf and Executive Director Matt Vogl were asked to give their presentation “How Virtual Reality Will Transform Healthcare” twice at the Colorado Health Symposium.  They are speaking to a new group of attendees right now, building on yesterday’s presentation. (see below).

Today, there are 72 emerging medical VR companies. There are at least 18 clinical sectors in which VR is being used to some degree, including cognitive behavior, mood disorders, exercise, addictions and pain management. “More than 3,000 studies have demonstrated that VR can improve behaviors, attitudes and health,” Walter told the group.

Until fairly recently, the technology was expensive, bulky and difficult to use. “But that is not the case today,” said Walter. “We can  bring it to scale.”

“I believe one of the most exciting areas for this technology is in behavioral health,” said Walter. Research has shown effectiveness for phobias,obsessive compulsive disorders, developmental disabilities, eating disorders, anger management, impulsive disorders and many, many more conditions.

Matt noted that Dartmouth University has worked on a virtual reality therapy program with NASA that would be used in deep space flight, such as manned missions to Mars. “Astronauts will suffer depression in those kinds of circumstances,” Matt explained. “But you can’t take a therapist with you and with a 20-minute lag time in communication to earth, counseling just won’t work remotely.”

The studies have shown the virtual therapists to be quite effective, sometimes more so than live professionals. “In most cases, people are more honest with this, because we all lie to our doctors,” said Matt.

Still, there is reason for caution.  With the technology moving so quickly, it is essential that medical professionals and researchers have input into new products. And, advancements such as artificial intelligence will expand the boundaries of what is possible.

“There is potential for downside,” cautions Matt. “But this is going to happen whether we like it or not. So we can sit on the sidelines and hope it’s done well, or we can get involved to make sure this technology is used in an ethical and effective way to help people.”

In addition, the potential for medical training is remarkable.  Among the applications: clinical skills, surgical skills, interpersonal skills, use of equipment and tools, team training, emergency response training and empathy.

Dr. Stuart Gottesfeld, an OB-GYN surgeon and former Board member of the Colorado Health Foundation, was intrigued after trying some of the VR programs. The potential for continuing education and training, particularly for medical professionals in rural and remote areas, “is tremendous” he said.

AUGUST 3, 2017  1:00 p.m.
Eric Liu, whose book has been called a primer on power and a call to active citizenship, is speaking what he calls the “zero-sum status of power in civic life.”

Liu says our responsibility and opportunity in this “incredible moment” are to:

“Power,” he argues, “is infinite.” Not zero-sum, where one must take power away from another to achieve influence.  “Bring people who have been out of the fold, in.” That, he says, is how we will shift the balance of power to address inequity in a real way.

If we “truly think about how to heal the body politic and economic and health justice, the reason to care about these things is because it is the only way we survive and thrive as a society.”


AUGUST 3, 2017  8:30 a.m.
The theme of the Colorado Health Symposium 2017 is “Let’s Talk About…Inequity.” After a full day of sessions yesterday, this morning CEO Karen McNeil-Miller opened the Symposium by taking questions. One challenged the Symposium to do better with inclusivity of all groups of Coloradans.

McNeil-Miller agreed with the desire for better diversity and talked of their Colorado Health Foundation’s work and community outreach. The, she challenged the who’s who of Colorado healthcare in attendance in return: “For those of you who run organizations, I ask, ‘What does your workforce and leadership look like? We can’t further diversify our ranks here until attendee organizations diversify.”

Food for thought.  Inspiration for action.

Liu is the founder and CEO of Citizen University and executive director of the Aspen Institute Citizenship and American Identity Program.

AUGUST 2, 2017  4:00 p.m.
No doubt people want to try out virtual reality programs for themselves!  After Walter Greenleaf and Matt Vogl wrapped their presentation and Q&A, attendees at Colorado Health Symposium 2017 lined up to experience VR for themselves.

AUGUST 2, 2017   2:00 p.m.
“There is a revolution going on right now in digital health.” That’s how Dr. Walter Greenleaf, NBHIC Director of Technology Strategy, framed the impact of technology on healthcare as he opened his presentation on “How Virtual Reality Will Transform Healthcare.”  In fact, he said, nearly every medical device is being rethought or redesigned. And a good part of this is due to virtual reality.

Virtual reality is not an emerging technology, however.  Walter started in VR research in 1984, when it was new and computers running VR cost a half million dollars.  It’s come a long way to where inexpensive VR headsets are sold commercially in electronics stores and online for gaming.  Medical applications, as  you would imagine, are more sophisticated and getting more so everyday.

“Every major tech player is putting large bets on this technology,” according to Walter, who is immersed in Silicon Valley in his continuing role at Stanford University. That includes Samsung, Facebook, Microsoft, Sony and others.

It’s estimated that VR will have 70 million users in six years; 30 million users in just three years. Most will be using mobile VR.  And that’s one reason why mental healthcare applications are so intriguing.  Decades of studies have shown VR to be effective in treating a wide range of clinical problems, ranging from addiction to strokes to PTSD.  Today, conditions that VR is used to  treat are schizophrenia, PTSD, anxiety, substance abuse, anger management, eating disorders and learning disabilities.  “It’s a long list,” said Walter.

The industry is growing, with tech entrepreneurs eager to break through.  NBHIC is working with several tech companies to shape effective treatments as the technology “wow” factor grows.  One thing that has medical professionals excited is that the growth opens up new ways of conducting therapy.  “I want to stress this: this technology has great potential for reaching remote populations,” said Walter.

Despite the amazing gains since the days of those $500K computers with headsets like bricks, the area of virtual therapy has room for much more development, said Matt Vogl, NBHIC’s executive director, who co-presented with Walter. “Don’t worry; therapists are not going away.”  As VR matures in the marketplace, it is increasingly important that the science of mental health treatment drives the technology.  It’s only then that the promise of virtual reality will be felt widely in the “real” world.

AUGUST 2, 2017   8:00 a.m.
And, it’s begun!  The 2017 Colorado Health Symposium is underway.  It started with a reciting by Toluwanimi Obiwoler, a Nigerian-born, Colorado raised author, playwright and Denver’s first Youth Poet Laureate.  Part of her inspirational poem reads, “There is space to listen…. I am one committing love to labor. Will you build with me?”

Karen McNeil-Miller, Colorado Health Foundation President and CEO, followed, welcoming the sold-out crowd of 600 to what she called the “Annual Meeting of the Movement.” She also unveiled the Foundation’s new vision: “Across Colorado, each of us can say we have all we need to live healthy lives.”

The new vision. Committing love to labor. What an aspirational start to the Symposium!

NBHIC kicks off its first virtual reality session — which is getting a lot of attention at the Symposium — at 1:45 this afternoon.

AUGUST 1, 2017
NBHIC is psyched to be part of the 2017 Colorado Health Foundation Symposium — an annual gathering of the Who’s Who of healthcare in our home state of Colorado. Our team will be at the CHF Symposium in Keystone, CO, from start to finish, August 2-4.

Walter Greenleaf, our director of Technology Strategy, is presenting on the power of virtual reality for behavioral healthcare, and there’s no one better to hear, if we do say so ourselves. Walter is a pioneer in the field, known worldwide for his expertise.

In addition, NBHIC is conducting virtual reality (VR) workshops, so that Symposium attendees can try out VR for themselves and experience first-hand the power of this technology.

Stay with us right here, as we update the goings on from this important gathering, beginning Wednesday morning.